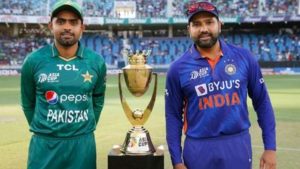 While the cricket world is waiting with bated breath for the mouth-watering clash between fierce rivals India and Pakistan in the ICC T20 World Cup in Melbourne on Sunday, media reports in Australia have left cricket fans in South Asia with a sense of fear. According to the weather forecast, there is a big chance of rain in Melbourne on October 23 which could seriously impact India’s opening match at the World Cup against Pakistan.

India and Pakistan have been placed in Group B of the Super 12 stage at the ICC T20 World Cup.

While India have dominated their arch-rivals in the World Cups across formats, Pakistan recorded their first win over the Indians last year at the T20 World Cup in Dubai.

The two teams won one match each the last time faced each other at the Asia Cup in the UAE,WHERE pak won asia cup after defeating india.