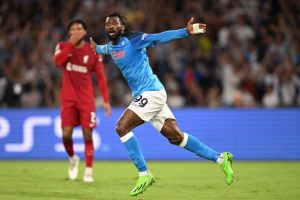 Dhaka – In the first match of the new season of the Champions League, Liverpool lost to the Italian club Napoli. Liverpool lost 4-1 in Group A match.

Jurgen Klopp’s team was 3-0 behind in the first half. If goalkeeper Allison had not stopped the penalty and Virgil van Dijk had not blocked from the goal line, Liverpool would have scored more goals. Piotr Zielinski gave Napoli the lead through a penalty in the fifth minute. In the 18th minute, Victor Osimhen missed the chance to double the lead from the penalty. But Andre Frank Anguissa and Giovanni Simeone scored to widen Napoli’s lead.

It was the first time since 2014 that Liverpool trailed in the first half of the Champions League. Zielinski added another goal in the second half. But soon after, Luis Dias scored for Liverpool. In the next match of the group, Ajax defeated Rangers by 4-0.