Melbourne:AUSTRALIA;- Virat Kohli single-handedly powered India to an epic four-wicket win over arch-rivals Pakistan with a magnificent 53-ball 82 not out in their big-ticket T20 World Cup game here on Sunday.
Pakistan recovered from a wobbly start to post a fighting 159 for eight. India completed the chase in the last ball, with Kohli and Hardik Pandya (40) doing the bulk of the scoring after a horror start to their innings. The two revived India with a 113-run stand for the fourth wicket after they were reeling at 31/4 at one stage.

Sent in to bat, Pakistan were well served by Iftikhar Ahmed’s 34-ball 51 and Shan Masood’s unbeaten 52 off 42 balls after they lost their first two wickets with just 15 runs on the board in the fourth over.

For India, Arshdeep Singh was among the most successful bowlers in the much-awaited match of the tournament, finishing with figures 3/32 in four overs at the iconic Melbourne Cricket Ground. 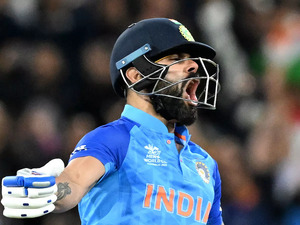 If it was not for the 14 runs in the 19th over, Arshdeep would have ended with better figures. Playing in his maiden World Cup, left-arm pacer Arshdeep gave India early breakthroughs before Pakistan steadied things with a 76-run partnership for the third wicket.

MD Adil Imam Danish is our Content Writer in tech, entertainment and sports. He experience in digital Platforms from 2 years. MD Adil Imam Danish is also a young and dynamic entrepreneur, a celebrity manager, a social media manager. His Twiter id is @its_me_adil_7 , facebook id is https://www.facebook.com/itsmeadilimam/
@its_me_adil_7
Previous Big B once gave away his ‘Best Actor’ award to Aamir Khan and Sanjay Dutt! Want to know why?
Next You wake up excited for these games: Kohli ahead of T20 WC India-Pakistan clash