Pakistan’s World Cup hopes suffered another blow with a shock one-on-one defeat by Zimbabwe in Perth.

An inspired performance from Zimbabwe’s bowlers ensured Pakistan finished on 129-8, chasing 131 to win.

Shan Masood looked to steer Pakistan out of trouble before he was dismissed for 44 off spinner Sikandar Raza, who took 3-25. It was Zimbabwe’s first win outside the first round of the T20 World Cup.

“It’s very important, especially after the work we did to get into the Super 12s,” said Zimbabwe captain Craig Ervine.

“We didn’t want to end our campaign there, we wanted to go in and play some really good cricket against some top teams and I think we did well today.”

Needing three to win from the last ball, Shaheen Afridi could manage just one and ended up trying to come back for a second run to get a joint. 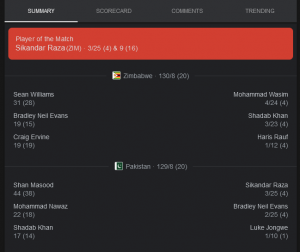 What happened in Perth will be remembered for ages. Sikandar Raza’s heroics causes a major upset for Pakistan. The men in green were chasing just 131 but they couldn’t do it. Zimbabwe have stunned Pakistan by 1 run and now, the way ahead for Babar Azam & Co going to get tougher in the tournament.

Raza, the senior face in this Zimbabwe team, produced a masterpiece with the ball in hand. He returned figures of 3/25 that certainly changed the course of the game.

The debate over Pakistan’s brittle middle-order is likely to get heated up after this defeat. Babar and Rizwan were out early again and then the following batters tried their hard but they had no answers to Zimbabwe’s brilliant bowling attack. One must feel sad for Shan Masood who forged a 50-run stand with Shadab Khan but once that was breached by Raza, Pakistan could never come back in the game. The likes of Muhammad Nawaz and Mohammad Wasim Jr tried to finish it for their team but they fell a run short.

With this win, Zimbabwe moves up to the third spot on the Group 2 points table while Pakistan are reeling at the bottom with zero points.