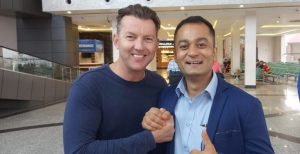 It is understood that Brett Lee has come to Nepal for the upcoming Nepal T20 League program in October. The league will hold a press conference with him in a few days.
Lee played Tests, T20Is and ODIs for Australia.

The most memorable one that comes to mind is the Edgbaston Ashes Test of 2005 where he nearly took Australia home from a hopeless situation in what eventually was a pulsating thriller of a game. Lee was also a fantastic fielder with a rocket arm and athletic build

During his international career, Lee was recognized as the fastest bowler in the world. He was an excellent fielder and a useful batsman in the lower order.

Lee took 310 wickets in his Test career and 380 wickets in ODIs.
Lee played for the Australian team that won the 2003 World Cup. He played his first Test in 1999 and retired from international cricket on 12 July 2012.

He also played IPL cricket. In January 2015, Lee announced his retirement from all forms of play at the end of the Big Bash League season. He then worked as a movie actor and commentator on Fox Sports.

MD Adil Imam Danish is our Content Writer in tech, entertainment and sports. He experience in digital Platforms from 2 years. MD Adil Imam Danish is also a young and dynamic entrepreneur, a celebrity manager, a social media manager. His Twiter id is @its_me_adil_7 , facebook id is https://www.facebook.com/itsmeadilimam/
@its_me_adil_7
Previous Kangana Ranaut goes after an editor for saying she used black magic claims to get success in the industry
Next Prakash Kathayat of Jumla won first place in the 5000m race competition